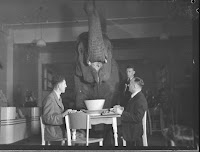 The elephant discussed in this blog entry is mental health. A person may appear to be in good health but the physical dysfunctions that underlie the mentally afflicted may be at work.  If a mentally ill person is placed in the care of a therapist (friend or prayer partner) using memory based therapy  traumatic psuedomemories can be produced.  The inappropriate use of such therapy on someone in psychosis can lead to bizarre pseudomemories, false accusations, family estrangement, innocents being imprisoned and a myriad of other horrid personal outcomes.

How has our culture dealt with the mentally ill in the past?
In the centuries prior to the 1800's all mental illness was seen as emerging from demons, witchery, evil spirits and other often supernatural sources.  Responses to mental illness included avoidance, isolation, restraints, imprisonment, torture, execution, burning at the stake or some combination of these actions.  All these horrid actions were meant to drive out the demons and evil thought to reside in the mentally afflicted person.   The transition away from these methods was slow partly due to the danger such people posed to those around them.  To protect themselves family members "disowned" the mentally ill person and claimed supernatural causes for the bizarre behavior, uncontrolled rage and/or horrid delusions .  The idea that mental illness was innate and caused by some spiritual deficiency still haunts us today.


In the 1800's psychoanalytical treatments arose that sought to assign causes for the emergence of mental illness.  Errors and wrongdoings while "training up a child in the way he/she should go" appeared to be a reasonable way to explain the mentally ill.  The assignment of natural causes for mental illness was in part related to the western culture's embrace of science.  Parental approaches, unhealthy relationships with parents, personal trauma and life conditions were seen as incubators of "mental illness" rather than supernatural spells or possession.   So for a century therapy was the dominant treatment for those who could afford it.   Increasingly options to calm and sedate the anxious, paranoid or manic patients came to include a variety of medications so that the ill person could be then be psychoanalyzed into health.  Eventually some psychiatrists came to recognize that medication was the primary and most reliable way to manage the symptoms of mental illness. The debilitating and often harsh side effects were worth the improvement in both emotional and mental functioning.  Doubts about psychoanalysis began to emerge as drugs alone appeared to help stem the symptoms and the counseling seemed haphazard in results and sporadic to the improvement which appeared dramatically when medication was provided in the right dosage.  Many psychiatrists noticed that mental illness popped up even among those who had healthy childhoods and new directions in research emerged during this fog of doubt starting in the 1950's.


In the 1960's and 70's studies of twins separated at birth through adoption revealed that the emergence of mental illness occurred at the same rate for those twins raised together or separately in different families with different resources and experiences.  The long held assumptions that parental approaches, personal trauma or life conditions alone created mental illness was severely challenged by these landmark studies.  Additional research repeatedly revealed that the nurturing conditions and personal life experiences alone did not always explain the emergence of mental illness.


We can look at the most documented examples of the mistaken psychoanalytically based assumptions.   The traditional psychiatric view at one time held that "frigid mothers" caused Autism in a child.  This persistent view was researched thoroughly and repeatedly found inconclusive data.  Schizophrenia was thought to be the outcome of over involved parents or traumatic family experiences.   In the 1980's studies finally confirmed that those suffering from schizophrenia did not have "over involved parents" or "childhood trauma" any more frequently than normal offspring.  Even when there was verified physical or emotional trauma in children many of the children went on to live productive lives at the same rate as those who did not have such verified events.   In 1999 the last such psychoanalytical assumption was found false when large scale studies revealed that those with schizophrenia recovered more quickly without relapse if they were at home with involved parents.   This came as the final stake in the heart of psychoanalysis which had long held an errant view of how to treat schizophrenia (hospitalization away from from family).


Then a physiological explanation emerged when studies of imprisoned violent offenders.   The study revealed that when trace metal imbalances in the blood were corrected reduced repeat offenses of violence to one fourth the levels of those untreated.   The results were stunning.  Such studies inferred biological reasons were at least a part of the cause for criminal behavior.   The researched links between mental illness and childhood challenges existed but even those from middle class homes with metal imbalances showed increased likelihood for violent behavior.  Increasingly, by the 1990's, the biological foundations began to be seen as a larger than expected contributor to pathological behavior.


In 1985 a book titled "The Broken Brain: The Biological Revolution in Psychiatry"  Dr. Nancy C Andreasen MD, PhD proposed with detailed evidence the now widely accepted view among psychiatrists that biological processes explains the presence of mental illness.   Dr. Andreasen was chair of the Psychiatric Department at the University of Iowa, did extensive research on mental health using brain scans,  had written psychiatric textbooks and popular texts on mental health and received numerous awards over decades for her service.  In 2000 Dr Andreasen received a presidential award for science..  Her nomination stated:


"Long before it was broadly acknowledged, Nancy Andreasen
understood that mental illnesses are biologically-based brain
disorders,  Her groundbreaking research on schizophrenia
has inspired hope for improved treatment and recovery..."


Doctors, current in the research, now know of a variety of physical and biological dysfunctions that create psychosis with its high suggestibility state, paranoia, vulnerability to delusions and even bizarre hallucinations.  Physical causes and biological mechanisms leading to mental illness  now include metal toxicity,  food allergies, undermethylation, over methylation and personal metabolic tendencies that inappropriately eject needed nutrients as waste products when under stress.  Recreational drugs, medication, sleep deprivation and even excessive water intake can are now also known to create psychosis that result in similar forms of mental illness.


A well known Psychiatrist, Dr. Abram Hoffer, was claiming adamantly as early as 1953 that a biological basis was at the root of mental illness. He was, in that regard, decades ahead of his peers who still saw psychoanalysis as the route to mental health.   He wrote a number of books on the treatment of those with mental illness and shared his insights regarding how to help the patient emerge from the illness in a book titled "The Orthomolecular Treatment of Schizophrenia" and on page 40 of that text he states:


"...I find it very helpful to have the family in my office
during the interview, with the patient's permission. A
lot of time is saved in gathering the information
needed to make the diagnosis.  It also helps when the
family hears the discussion and knows what the
treatment will be.  Although most psychiatrists no
longer blame the family for the illness of a relative,
it can still occur.  It is important to remove any guilt
the family may have derived from previous outmoded,
harmful explanations."


Dr. Hoffer recognized, in the quote above that therapists with good intentions could implement errant treatments, using memory based therapies.  This harmful technique could be compounded if a mentally ill person in a highly suggestible state and vulnerable to delusions formed horrid pseudomemories of events that never actually happened.  Dr. Hoffer was aware that successful treatment of those suffering from mental illness often relied on families and family members.  The delusional patient treated with memory based therapy could accuse family members of horrid crimes, of being space aliens or of being part of an some effort by a government agency to control them.  The result of such delusions was often alienation from the very people that could best help the mentally ill person most.  Familial estrangement is one of the signs of mental illness.

Why does mental illness persist in spite of our wealth and knowledge?
In 2019 experts in Memory wrote in alarm in the Journal of Psychological Science about the growth of false accusations and the influence of therapy using methods know to create false accusations. The article specifically addresses the hand in hand relationship between mental illness (psychopathology) and false memories:
There is good evidence that certain forms of psychopathology
(e.g., schizophrenia) go hand in hand with a tendency to accept and give in
to external pressure (Peters, Moritz, Tekin, Jelicic, & Merckelbach, 2012).
More importantly, existing work also indicates that psychopathology
(i.e., depression, PTSD) is linked to an enhanced propensity to produce
spontaneous false memories.
The connections between mental illness and false memories is only now being documented repeatedly in the research literature.  These false memories may be at the root of the many false accusations of physical abuse, sexual abuse and incest among other emotionally revolting crimes.
In our culture mental illness is commonly associated with an inborn character flaw, a flawed spiritual formation or the outcome of some shameful trauma. None of these assumptions explain the presence of mental illness and those wrong assumptions work to suppress the needed discussion.   In our culture the family is often totally  unaware of the biological causes of mental illness because of the silence imposed by shame.  In fact a dysfunctional metabolism ignites mental illness that results in despondency, rage, paranoia, bizarre delusions and horrid hallucinations mistaken for reality.  Our city streets are full of such people today.  The mistaken notions about mental illness feed the ignorance, suppress discussion and prevent the proper care of the mentally ill person.  One would expect that the family would be aware of their common physiology but this is often not so. The shame and the silence it nurtures prevents learning about the true cause.  In fact a family may seek to distance themselves from the mentally ill family member.  Nothing could be worse as delusions are strengthened, rage and despondency rewarded and many of the ill live in a hopeless squalor.


A just and compassionate response would be to support the family unit in the caring for the ill person. Part of the issue today is that the family is seen by many as the problem that causes or ferments the illness.  Actually the family, as Dr. Hoffer realized, has a huge impact in the successful outcomes (much better than institutionalization).  I hope, one day, that the data and research become better known.  Our entire society would be better off by encouraging recovery from mental illness rather than perpetuating the illness with lack of treatment and isolation from family.

Did you read to the end?  Thank You for your interest! The points that I make are based on research studies I have reviewed, on the books I have read on this topic and the personal experience our family has had in seeing a family member recover from mental illness.


Books that I have reviewed on this topic may be of interest to anyone who read this far:


Hoffer, A, Orthomolecular Treatment for Schizophrenia (1999)

Other references useful in formulating the summary a mental health treatment depicted above include: